Susan Sorrell Hill is a painter and illustrator living in Northern California. Her artwork is quite magical in every way, just by looking at it you are drawn right into a fairytale. Currently she is working on a children's folktale "The Emperor's Pear Tree", the book will probably be published in the Spring of 2012. 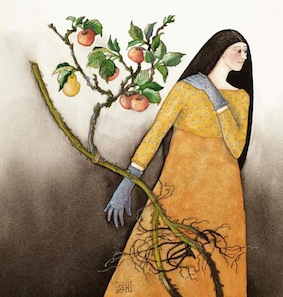 Your work is often inspired by fairy tales? How do they inspire you and why?

I love fairy tales because most of them incorporate an element of Mystery, an indication that there is a lot more to Life than meets the eye, maybe more than we can ever know with our rational minds. And because there is this element of Mystery, an artist has a wider realm of imagination to work in. I have always been fascinated by the “archetypal Journey of Life”: the themes and patterns that appear all over the world and influence every personʼs life. In literature, these archetypes have been traditionally expressed in fairy tales and folktales, as well as in ancient myths. They also are expressed in the Tarot, and discussed in psychology texts. Because I love books even more than art-for-the-wall, I have gravitated--in this second half of my life--back to my first love, illustration for childrenʼs books.

What was your hardest work up until now?

The hardest work has been making the decision to focus on book illustration, rather than to make work solely for galleries. Despite all of the brilliant art that has been and is being done for books, illustrators are still usually seen as second-class artists, so I had to discover that I really loved illustration, before I could give up the fantasy and hope of being the toast of the New York gallery scene. At the same time, I made the difficult decision to return to watercolors and working small, and to put oils, which I had been working with for years, aside for the time being. After that, the way ahead looked clearer.

Why did you choose art?

I donʼt think that it was a choice. Making beautiful things has always been my best talent, no matter which medium I was working in. Iʼve painted large in other mediums, made jewelry, thrown pots, sculpted with handmade paper, painted on silk, sewn clothes, designed patterns for textiles and gift wrap, and probably some other things that Iʼve forgotten. In the end, it wasnʼt “to be or not to be an artist,” but just which medium to really focus on.

Did you ever want to do something else besides art?

As a pre-teenager, I wanted to be a Rock ʻn Roll singer (despite the fact that I couldnʼt sing, and was very uncomfortable in front of a crowd). Fortunately, that fantasy faded. I knew early on that making art was my calling, but if I would ever have considered anything else, it would have been working as a chef, a clothing designer or a gardener. I have enjoyed all of those in a tiny way in my personal life, but it seems that to be a really great illustrator, drawing and painting must become the primary creative focus.

When I was in my twenties, working as a graphic designer and illustrator (before the digital era), my work was used for posters, ads, logos or business stationary. It was fun to see that work in print, and widely distributed. But I find working on a book project, especially with a text that Iʼve written myself, to be far, far more enjoyable and creatively challenging than any form or art for commerce. To be immersed in setting the stage, inventing the characters, and visually creating the ʻflowʼ of a book is deeply satisfying. A bit like playing ʻgod,ʼ perhaps! Finding oneʼs way in the book illustration field seems to take persistence, and perhaps some luck too. Iʼve learned that there are hurdles inherent on any path...perhaps especially on a artistʼs path, because creative work is such a personal thing. But in the end, the question that guides our choices has to be, “Do I love it?” 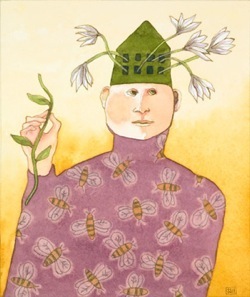 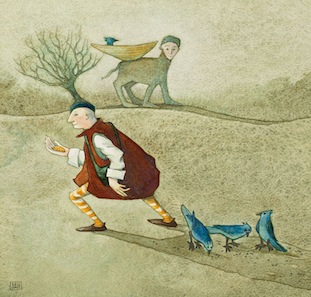 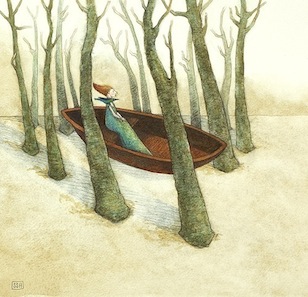