Most of you know that I'm organizing a workshop about digital publishing for Social Media Week in Berlin on Thursday (I'm so excited and hope it will be a fun evening filled with creativity). My lovely friend and gorgeous illustrator Tahira Lubrano kindly created an illo for the workshop, which I just had to show you! Thanks TJ!!!

Richardson Ovbiebo: "The Forms I Heard" 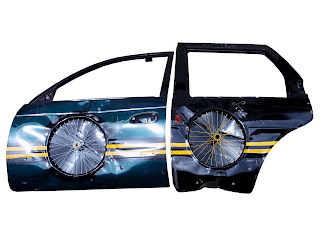 Richardson Ovbiebo, Bolla, 2011, Bicycle wheels on car doors
The first solo-exhibition by Richardson Ovbiebo "The Forms I Heard" explores Ovbiebo’s interests in social issues that are represented by various objects, particularly those encountered in everyday life. This is exemplified in Bolla (2011), which emerged from an artists’ workshop that took place on the landfill in Isolo. The title of the work is a term used to refer to sites like the workshop location, and the persons working therein. Composed of two car doors, which are painted with the same colors and displayed as though they were being forced together, Bolla’s physical properties emphasize the shared fate of these doors, their being melted together and molded into various steel objects.
Like the doors, are the paths of these persons also pre-determined? Have they become rigidly fixed in a system, a cyclic process like the very recycling they engage in everyday? This work and the others highlight the relationships humans have with objects and how these items signify the way lives are lived.
A graduate of Yaba Polytechnic, Ovbiebo’s work has been featured in numerous forums, including exhibitions at the Contempory Center for the Arts (Lagos), “Lost in Lagos—the Artist’s experience” and several Arthouse Auctions. In 2009, he won 1st Prize in the Nigerian Breweries and African Artist Foundation, National Art Competition “Nigeria the Future I See.” He was First Prize Winner in the Fashion Designers’ Association of Nigeria and African Artist Foundation Exhibition, “Design inspired by Fashion” in 2009, and a finalist for the Creative artist of the Year– Future Award Nigeria in 2010. Richardson Ovbiebo, born in 1982, hails from Igbanke in Edo state. He graduated in 2007 from Yaba College of Technology in sculpture.
Eingestellt von Trade Your Talent um 9/20/2011 No comments: